I was pretty good in math when I was in school. I was able to answer the problems correctly and my SAT score for math was considerably higher than my verbal score. That was many, many years ago, and unfortunately, I don’t recall much about the math I took back then.

When I became a teacher,  I tried to make math more meaningful. We had lots of manipulatives for students to use – math tiles, base ten blocks, Cuisenaire rods, tangrams, link cubes, pattern blocks,  pentominoes – and we learned new concepts using these concrete materials first before going to the representational and abstract in mathematics. We did “number of the day” and students were encouraged to do mental math as they came up with pretty awesome equations.  I learned about problem-solving and having students discuss how they got their answers, and students were able to share their strategies and discuss the reasonableness of an answer. As a teacher, I did my best to stay away from misconceptions that might be a barrier for my students’ math understanding later on in their schooling. But the more I read blogs by mathematicians like Sunil Singh and books about math like Mathematical Mindsets by Jo Boaler, the more I realize that I fell short as an educator and as a parent. In fact, as the graphic below shows, math should be about exploring and discovering as opposed to just learning specific skills and formulas to solve problems or to pass a test. I decided that during this time where staying-at-home is necessary, I would “play” with math and include my grandsons in the process. 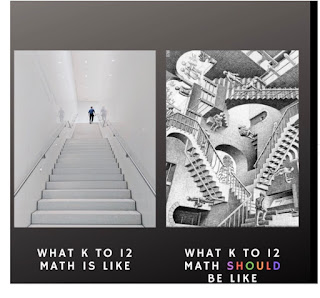 I saw a tweet and a screenshot by Sunil Singh about the Is This Prime? game, and I was hooked. I shared the link with my grandsons and my son since they live on the mainland. I challenged them to beat their high score. I found myself frustrated at making the same mistakes so I decided to make a list of prime and not-prime numbers, looking for patterns. I got up to 201. Then I asked myself why it was important to learn about prime numbers and did a search. Here’s a great article, supposedly written for children, about why prime numbers are exciting and important. I also realized that I could have used a hundreds chart to determine all the prime numbers from 1-100, but that’s okay because writing down factors helped me to see patterns. I know that won’t help me to beat my son’s top score (62) or Sunil’s top score (66), but that’s okay. I was exploring and discovering something about mathematics that I didn’t know before.

One of my friends posted a “Crack the Code” game on Facebook. It was another fun math activity; I’ll admit that my first try was wrong, but I realized what my mistake was. Making mistakes and having math stamina (aka not giving up) is something I need to accept as part of playing with math. Can you crack the code?

Then I saw a video on Twitter and was fascinated by it; I shared it with my grandsons. Does it really work? I had to find out; it did! Then I saw that my son had posted a photo on his Facebook page with this caption: Day 13 of quarantine… Grandma has the boys playing with a cardboard box. My son explained that he knew this would work because that’s what they did when he helped with packing and moving households as part of his job for several summers. However, he wanted his boys to see this for themselves. I think they were as pleasantly surprised as I was that it actually worked. Then we had a little discussion via text about which box had the greater volume. Hands on, relevant math.

Now my grandsons and I are going to play a modified version of “24” which might be a bit of a challenge since we’re not in the same room. Hopefully, though, the problems will make all of us think more creatively about math operations.
Check out this video from the International Day of Mathematics. There is so much more for me to explor and discover as a mathematician; after all mathematics is everywhere!