During this pandemic while we are staying at home, I have noticed more sharing of jokes, memes, and funny stories in my emails and posts on social media. I think it’s great that we can have a good laugh even while cooped up at home for who-knows-how-long. I’ve also noticed that more of my Facebook friends are sharing the meals they are cooking, and many look amazing! Earlier, I received 3 emails asking me to send a recipe to the first name on the list, add my name to the bottom, and I would receive recipes in return. Sorry, Esther, Traci, and Naomi. I broke the chain. 😔

When I became a mom of 3 sons, I cooked, but mostly, they were simple dishes. My hubby Randy is satisfied with a dinner of beef stew, spaghetti, chili, Spam/eggs/and rice or other simple meals, and because we were often on-the-run when the boys were growing up, that’s what I would prepare. After I became a principal, I often got home late so it became a habit to go out to eat or to pick up fast food. This stay-at-home mandate means I am starting to cook again.

This morning, for some reason, I started thinking about breaking that recipe chain, and I began to reflect on all the good memories of food as I was growing up. I remember Grandma Amemiya’s maki sushi; my sisters and I tried to roll the sushi like hers, but while her fillings were perfect and in the middle, ours were usually off-center. Grandma also made the good luck New Year’s Eve ozoni (mochi soup) which we looked forward to. After Grandma passed away 18 years ago, my Mom asked me if could take over the responsibility of  making the ozoni for our extended family. After the first year, I wasn’t so sure I wanted to continue; it’s hard work preparing all the ingredients, and my arms and back ached for a few days afterwards. Luckily, I stuck with it, figured out how to mise en place (French for ‘getting everything ready’), and ozoni is something our family looks forward to every year. Mom was also a great role model for cooking; she took what was available – often veggies from Dad’s garden or fish/seafood he had caught – and turned them into meals for our family of 7. She also made the best jams and jellies from pineapple, guava, and strawberries. My mother-in-law was also a great cook, and I don’t think I ever quite lived up to Randy’s expectations. After all, Mom’s cooking is always the best, right? Now, our son Justin is undoubtedly better than me when it comes to cooking. He experiments and tries to replicate what he eats at restaurants. He shares his love for cooking with our grandson; it is amazing how much this 10-year-old knows about cooking! (Here’s a blog about him: From Cook to Chef)

Although it’s a little late, I decided to share two recipes which I could have shared for that recipe exchange. The first is my Dad’s handwritten recipe for the kim chee he made with the cucumbers he grew, and the second is a recipe for Swiss Steak that my mother-in-law shared with me, a favorite of Randy’s. 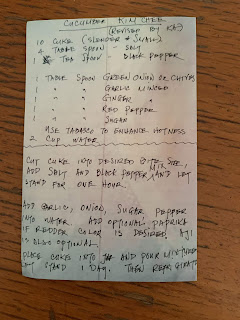