This was the headline in this morning’s Honolulu Star-Advertiser. 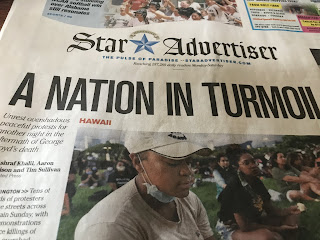 I am so saddened by the state of our country. I rarely use this blog to share my political views, but this is not a political situation. It is a case of failed leadership.
It’s been a week since the tragic death of George Floyd. People are angry. COVID-19 has forced us to alter our lifestyles and to social distance. So when something like this happens, people, especially people of color, are even more upset. They choose to defy social distancing orders and to peacefully protest. Yes, there were people who looted businesses or did other unlawful activities. Those who committed crimes should be arrested and held accountable, and it appears that those people were not necessarily there to protest but to use this time of unrest to loot and destroy. According to the news I’ve been following, most of the protests and protesters were intended to be peaceful.
Now the President chooses to inflame tensions by calling in the US military so he can be the “law and order” president. He threatens to mobilize military resources not just in the nation’s capital, but also in states even if governors have not asked for his assistance. I am frightened that our military troops are being asked to use force against their fellow citizens. I am appalled that no one can reign in this runaway train of a presidency. What is next?
Last year at this time, my husband Randy and I were excitedly packing for a Revolutionary-Civil War trip with our son and grandsons. (I shared some of our experiences in these blog posts: What an Experience So Far!  and Experiencing History) After visiting important places and learning about historical events in Boston, Philadelphia, and Washington, D.C., our grandsons have a better understanding and pride in our country. It is so sad that today, a mere year removed from our trip, our grandsons are witnessing the desecration of national monuments as well as looting and violence in the very places we visited. People are angry about the unnecessary and tragic death of a black man at the hands of a police officer. This problem won’t be solved by sending in the military and using force to try to silence the protestors.
America, we can and must do better. Our children are watching.